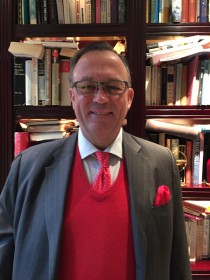 Based in Hong Kong

Dr. Enzio von PFEIL, comes from an iconoclastic background. His personal upbringing began in Africa and then rapidly moved to Germany, England, and Asia. His intellectual upbringing is holistic, focusing on politics & history, economics and macro-investments.

His schooling was done in Germany, England and America, where he graduated from High School in Eugene, Oregon, having specialized in debate and public speaking. At the time, he was one of America’s youngest Eagle Scouts with a God & Country award, too. Then he moved back to Hamburg, Germany, to complete the local Abitur with first class honors in German. At university, he studied economics very much influenced by Nobel Laureate Friedrich von Hayek in Freiburg i. Br., Germany. There he was awarded the “Phi Beta Kappa” of German scholarships, as well as another one by the Free Democratic Party. Having done his M.A. in record time, he also completed PhD in record time . The subject was an empirical study of German direct investment in the United States. It was published in German and in English. At this time I was Assistant Professor, Economics, in Freiburg.

His professional career began as a graduate trainee with the bank of its day, Morgan Guaranty Trust in Frankfurt and New York City. After that, he moved to another top bank, J Henry Schroder Wagg, in London, where he specialized in the management of currency risk. During this time he wrote the seminal work on Effective Control of Currency Risks, the first of its kind, with Macmillan Press. He taught this course as a Senior Visiting Fellow at the City University Business School, London. After that, he became a Private Banker with American Express Bank, London; He focused on clients in Istanbul, Turkey. His Far East career as Chief Regional Economist began with Smith New Court Far East, London and Hong Kong, for whom he established an award-winning research product which he was responsible for maintaining and selling. Research coverage went from Japan to Australia. Moving to Hong Kong in 1989, he crossed-over to the top merchant bank of its day, S G Warburg, where he fulfilled a similar role after 1992. After its takeover by Swiss Bank Corporation he moved on to become Chief Regional Economist for ABN-Amro Ltd., and then for some boutique brokerages.

Since 2000 he has re-invented himself as a discretionary asset manager, now as Private Capital’s Chief Investment Strategist. During this time he has written Trade Myths, in which he analyzes how multinationals influence trade balances.

Concerning his speaking career, he has been a regular TV contributor for CNBC, CNN, BBC, Bloomberg and Reuters. In addition, he contributes to Radio Television Hong Kong as well as Bloomberg Radio.

He gives speeches to various professional bodies in Hong Kong, mainly in English, but also in German.