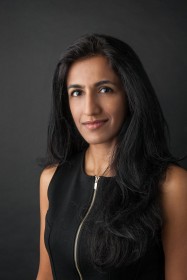 Dr. Ayesha KHANNA is Co-Founder and CEO of ADDO AI, an artificial intelligence (AI) solutions firm and incubator. She has been a strategic advisor on artificial intelligence, smart cities and fintech to leading corporations and governments. Ayesha serves on the Board of Infocomm Media Development Authority (IMDA), the Singapore government’s agency that develops and regulates its world-class technology sector to drive the country’s digital economy and power its Smart Nation vision. Ayesha is also a member of the World Economic Forum’s Global Future Councils, a community of international experts who provide thought leadership on the impact and governance of emerging technologies like artificial intelligence.

In 2014, Ayesha served as a member of the Ministry of Education, Singapore, steering committee resulting in SkillsFuture, Singapore’s innovative national program that aligns education with economic demand, career guidance and lifelong learning to prepare citizens for the fourth industrial revolution. She is Co-Founder of ADDO AI Education, an enterprise training leader that upskills corporate employees and students in data science, data engineering, and applied machine learning with curricula designed by leading academics and experienced industry professionals.

Ayesha is also the Founder of 21C GIRLS, a charity that delivers free coding and artificial intelligence classes to girls in Singapore. Programs that 21C Girls has partnered in include Code in the Community, a program sponsored by Google and that has taught thousands of children (8 – 14yrs) coding, and Empower, which has partnered with Ngee Ann Polytechnic to teach young adults (18 – 24yrs) the basics of artificial intelligence.

Prior to founding ADDO AI, Ayesha spent more than a decade on Wall Street developing large scale trading, risk management and data analytics systems. Ayesha was co-founder of the Hybrid Reality Institute, a research and advisory group established to analyze the social and economic impact of accelerating technologies.

Ayesha is author of Straight Through Processing (2008) and co-author of Hybrid Reality: Thriving in the Emerging Human-Technology Civilization (2012). She has been published and quoted on technology, innovation and smart cities in The New York Times, BusinessWeek, TIME, Newsweek, Forbes, Harvard Business Review, Strategy+Business, and Foreign Policy.  She has presented at major financial, technology and other industry conferences, provided high level government briefings, chaired symposiums such as AI Asia, and spoken at TEDx events.

She is an advisor to the startups Octa (a chatbot for young travellers) and Arro (a delivery robot for sports).

Ayesha has a BA (honors) in Economics from Harvard University, an MS in Operations Research from Columbia University and a PhD in Information Systems and Innovation from the London School of Economics.

Congratulations to our SAGE speaker and author Ayesha Khanna for being featured as one of Singapore’s Power Women!

Ayesha Khanna chosen as one of the top FinTech influencers in Asia by Fintech Asia.

Artificial intelligence has been called one of the most significant technologies of our time. But what is the reality behind the hype? With some of the world’s most recognized companies as her clients, Dr. Khanna provides insights on how innovative firms are embracing data and machine learning to leapfrog competitors and win new customers in the process. She also provides recommendations for how your firm can accelerate its AI journey as well as use AI responsibly to engender trust amongst consumers and investors.

THE FUTURE OF WORK

AI, robotics, additive manufacturing, AR/VR, quantum computing, and gene editing are among the suite of revolutionary technologies that are disrupting every industry in the world. What do they mean for the future of work and jobs? Dr. Khanna takes you on a journey through the main forces that will reshape the corporate world and labor markets, emphasizing how each sector can leverage these breakthroughs to make workers more productive, innovative, and empathetic. This process of human-technology co-evolution Dr. Ayesha Khanna will forever change how we view the global economy and our role in it.

PUBLIC-PRIVATE PARTNERSHIPS AT THE TECHNOLOGICAL FRONTIER

New technologies such as artificial intelligence (AI), the Internet of Things, and robotics can offer urban businesses and citizens higher quality, more productive, and more sustainable lifestyles. The key shift underway is from centralized, top-down models to an ecosystem approach that is inclusive of corporate and civic stakeholders, especially digital native and data-driven companies. With a Ph.D. in information systems focused on smart cities, Dr. Khanna delivers a comprehensive assessment of case studies and best practices on how to effectively implement and be part of the Smart Cities 2.0 paradigm.

TOP TEN TRENDS THAT WILL DISRUPT YOUR INDUSTRY

AI-driven automation, edge computing, industrial and nano-robotics, and human enhancement are just a few of the main trends that will significantly impact all industries in the coming 5-10 years. Using illuminating case studies, Dr. Khanna discusses how these accelerating technologies will both disrupt business models and operations but also open up new opportunities to lift your firm to new heights. With experience advising some of the world’s largest corporations on data-driven digital transformation and innovation, Dr. Khanna highlights the key technologies that you must include in your strategic planning for the decade beyond.

INNOVATION IN AN ERA OF DISRUPTION

Having advised some of the world’s biggest firms (telcos, banks, logistics, retail, healthcare) on their data-driven digital transformation, Dr. Ayesha Khanna offers actionable guidance on how to deploy AI and other new technologies in your organization. Connecting powerful tech trends to value creation for your business and navigating the cultural change and bold leadership required, Dr. Khanna’s masterclass helps executives catapult forward in their innovation journey. 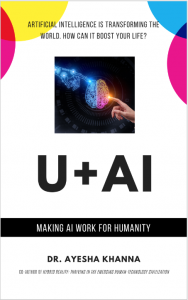 “Listen to this woman!”