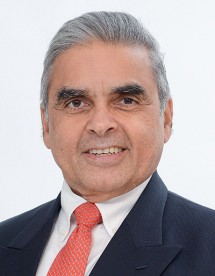 Kishore MAHBUBANI has dedicated five decades of his life to public service: 33 years in the Singapore Administrative Service, 13 years as the Founding Dean of the Lee Kuan Yew School of Public Policy (NUS) and continuing now as a Distinguished Fellow at the Asia Research Institute, NUS, where he has launched the Asian Peace Programme and a MOOC on US-China relations, https://www.edx.org/course/us-china-relations-past-present-and-future.

In his 33 years as a Singapore diplomat, Kishore took on many challenging assignments, serving for example in Phnom Penh, Cambodia, in 1973/74 when the city was shelled almost every day. Shrapnel penetrated the walls of his house. He also served in Kuala Lumpur, Washington DC and two stints as Singapore’s Ambassador to the UN (1984-1989 and 1998-2004). He also held the apex position of Permanent Secretary of the Ministry of Foreign Affairs from 1994 to 1998. He was also conferred the Public Administration Medal (Gold) by the Singaporean Government in 1998.

Kishore had an equally illustrious career in academia. He was appointed the Founding Dean of the Lee Kuan Yew School of Public Policy in August 2004. Within five years, the LKY School was admitted to the Global Public Policy Network, a small elite club of Schools of Public Policy (with the other members coming from Columbia University, London School of Economics and Sciences Po, Paris). Despite his heavy administrative duties, Kishore proved to be a prolific author. He has also been a prolific author, having published eight books: Can Asians Think?, Beyond The Age Of Innocence, The New Asian Hemisphere, The Great Convergence, Can Singapore Survive?, The ASEAN Miracle (co-authored with Jeffery Sng) and Has the West Lost It?. His latest book, Has China Won?, was released on 31st March 2020.

Kishore has received global recognition for his intellectual contributions, having been listed several times in the list of top global thinkers by Foreign Policy and Prospect Magazines. The Financial Times listed him as one of the 50 individuals who would shape the debate on the future of capitalism. Perhaps the best summary of Kishore’s contributions was made in the citation for the US Foreign Policy Association Medal he received in June 2004: “a gifted diplomat, a student of history and philosophy, a provocative writer and an intuitive thinker.”

Kishore has held positions in several globally significant committees. He was the founding chairman of the nominating committee of the Lee Kuan Yew World City Prize (2009 to 2019). He also served on the Commission of Eminent Persons to revive the future of the International Atomic Energy Agency (IAEA) in 2007/08, under the Chairmanship of the former President of Mexico, Ernesto Zedillo. He has participated in the annual meetings of the World Economic Forum (WEF) in Davos twenty times, serving also in several WEF committees. In April 2019, he was the second Singaporean to be elected as an honorary international member of the American Academy of Arts and Sciences, which has honoured distinguished thinkers, including several of America’s Founding Fathers, since 1780.