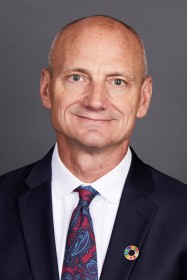 William (Toby) USNIK JR founded Philanthropic Impact Partners (π) in 2016. Philanthropic Impact is a global advisory firm that draws on three decades of experience working with the world’s most influential corporations, philanthropists and social innovators to tackle problems both global and local and build a shared sense of community. We help individuals and organizations build their legacies.  A small, bespoke firm by design and discipline, Philanthropic Impact provides a consistent, top quality set of value added services to help its clients optimize their philanthropic/CSR missions.

Previously, Mr. Usnik was Chief Corporate Social Responsibility (CSR) Officer and International Director at Christie’s, the world’s leading art business. In this role, he worked with colleagues, clients, vendors and outside observers to execute Christie’s CSR initiatives globally under its Art+Soul umbrella. Through CSR, Christie’s continues to aim to responsibly manage its people and practices in order to leave a positive, enduring impact on society, particularly in helping to preserve and promote the world’s collective cultural heritage.

Previously, he was Executive Director of Public Relations for The New York Times Company since 2001. As a member of the Corporate Communications department, he was responsible for media relations and crisis communications for the Company’s diverse media properties. Prior to joining the Times Company, Mr. Usnik was the Director of Global Communications at Razorfish, a firm specializing in digital technology consulting services, where he was responsible for media relations, industry analyst relations, employee and crisis communications. From 1993 to 1999 he worked for American Express as director of international public affairs.

Prior to joining American Express he worked in administration at World Education Services in New York, 1991 to 1993; Columbia University, 1988 to 1990; and the University of Pennsylvania, 1987 to 1988. Mr. Usnik received a B.A. degree in history and French in 1985 from Hampden-Sydney College, an M.S. degree in university administration in 1988 from the University of Pennsylvania, and an M. Phil. degree in international and comparative education from Columbia University in 1992. He was a Fulbright Scholar to Belgium from 1990 to 1991 and a graduate of the Coro Foundation’s Leadership New York program in 1997. He is past president of the Public Relations Society – New York, and has been a member of the Wisemen Group, The Seminar, and the International Association of Business Communicators – all corporate communications professional associations. For nearly two decades he served as a boardmember of the Empire State Pride Agenda civil rights organization and from 2011-2016 was a director of The New York Foundation for Arts. He co-leads the Communications Advisory Council for the Humane Society of the United States. He is also a private pilot and resides in Manhattan.