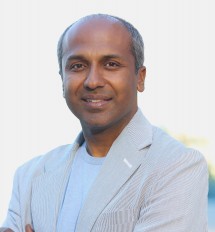 Sree SREENIVASAN is Columbia University’s first Chief Digital Officer until recently (where he works closely with the Columbia communications team) and Professor of digital journalism at Columbia University’s Graduate School of Journalism. This summer he will become the Metropolitan Museum of Art’s Chief Digital Officer. In his CDO role, he is working on various online education, digital and social media initiatives across campus. He also works to help journalists and other use technology in smarter ways (through workshops and SreeTips, a social media blog on CNET).

For four years, he taught an entrepreneurship class with Ken Lerer, co-founder and chairman of the Huffington Post and now head of Lerer Ventures. He has also taught media marketing classes at Columbia Business School. Because of his interest in startups, he has served as a mentor and adviser to dozens of new ventures, including many by his former students. At the same time, he teaches about intrapreneurship – how to foster innovation and create change within big organizations. In 2010, a Manhattan-news site and business he helped create, DNAinfo.com, was named one of the six hottest news startups by BusinessInsider.

Sreenivasan was named one of AdAge’s 25 media people to follow on Twitter; and one of Poynter’s 35 most influential people in social media.

Sreenivasan also been a fixture on NYC-area television for more than 10 years and occasionally appears on various TV shows (on CNN, NBC’s Today Show, CNBC and elsewhere) to talk about technology, the media and more. From February 2012, he has been appearing weekly on WCBS-TV. From 2007 to 2009, he was WNBC-TV’s tech reporter, covering all kinds of technology issues, gadgets and trends. He has also guest hosted segments of “Asian America” on PBS, a nationally syndicated English program about Asian American affairs (samples).

In the past, as a freelance journalist, he has written for The New York Times, Business Week, Popular Science, Time Digital, National Journal, India Today, Bloomberg, Forbes.com, Sesame Street Parents, Rolling Stone (samples). For several years, he wrote a weekly “Sree’s Smarter Surfing” tip for ShopTalk, the largest TV-industry newsletter and wrote a weekly tech column for DNAinfo for two+ years. He is currently a paid blogger of CNET News.

He is Co-founder and former President of SAJA, the South Asian Journalists Association since 2009, a group of 1,000+ South Asian journalists in New York and across the U.S. and Canada. As main fundraiser for SAJA and former administrator of SAJA’s awards and scholarships programs, he continues to serve on its executive board and to write for SAJAforum.org, its newsy blog.

In recent years, he has focused his attention on social media and created such unique learning opportunities as Social Media Weekend, Social Media One-Night Stand and more. More than 4,000 people from 25 countries have attended just his social media sessions.

“Professor Sree gave an excellent presentation and that my learning experience of the Internet is 150% better than before his presentation.”

“Professor Sree’s presentation at the Columbia Club luncheon in Naples was riveting, fast-paced and packed with information. He presented his material clearly, accessing the internet in real-time to introduce his audience to new and useful websites. Sree was friendly and open to questions at all times, and his style and sense of humor contributed to what was a fun learning experience.”