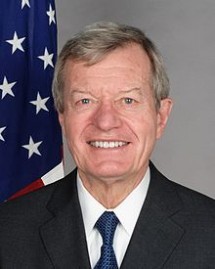 On January 7, 2014 U.S. President Barack Obama nominated Max Sieben Baucus to be Ambassador of the United States of America to the Peoples Republic of China. He served as Ambassador from February 21, 2014 until January 19, 2017. Ambassador Baucus formerly served as the senior United States Senator from Montana. He served in the U.S. Senate from 1978 to 2014 and was Montana’s longest-serving U.S. Senator as well as the third-longest tenure among those serving in the U.S. Senate.

While in the Senate, Ambassador Baucus was Chairman and Ranking Member of the powerful Senate Committee on Finance. While Chairman, he was the chief architect of the Affordable Health Care Act (ACA) which was signed by President Barack Obama into law March 23, 2009. The ACA expanded health care coverage and reformed reimbursement.

Ambassador Baucus has extensive experience in international trade. As Chairman of the Senate Committee on Finance, he led the passage and enactment of the Free Trade Agreements with 11 countries: Australia, Bahrain, Jordan, Chile, Colombia, Morocco, Oman, Panama, Peru, Singapore and South Korea. He also was deeply involved in orchestrating the congressional approval of permanent normal trade relations with China in 2000 and in facilitating China’s entrance into the World Trade Organization in 2001.

Ambassador Baucus earned a bachelor’s and law degree from Stanford University. He is married to Melodee Hanes and they have three children and two adorable granddaughters.

—All crises by their nature are unpredictable.  Not anticipated means not prepared for.

—2008 fin crises same.  No one saw it coming. It devastated our economy.  We hadn’t prepared for it. So, we had to find a new solution. It was draconian. It gave about 700 billion to banks and auto industry to keep them from collapsing which would have devastated our economy. Republican president and democratic congress worked together.

—It was improvised.  Never done before.  Had to act quickly.

—It was not a bailout.  It was a loan or purchase of stock which was later repaid to the US.

—It worked.  It was the massive federal government response needed to shock the system back into confidence.  The US recovered quickly.

—It’s an unpredicted and unprepared for crises that requires immediate action.  Also requires, in our form of government, the two main branches of government to work together.

—It requires an immediate, improvised, figure it out response.

—It’s different in that this started in another country, not in the US.

—Each country has a similar but different response. China authoritarian govt was initially slow, as was the US.  But China authoritarianism cranked into high gear with total lockdown in Wuhan and Hubei Proves where virus started.  US response as democratic form of government is slower to sufficiently organize and address.  Same with Italy.

—This is different, too, in that the stock market has fallen much more now with the virus than it did during the financial crises.

—It’s different it that it’s a pandemic, it’s worldwide. Moreover, the solution much more unknown and difficult than the financial crises.

—financial crises was a single event.  It was narrowly focused on the financial industry.  This is much broader. If effects all institutions.  It’s spread by people all over the world. Effects everyone.

—That means the solution to this particular crises must provide assistance not especially to institutions or companies, except for airlines, hotels, etc, but assistance to individual people that will be needed but very difficult to administer.

Should be assistance to individuals. Perhaps tax credits to employers who keep their employees, similar to what’s in code for US National Guard who have jobs before deployed overseas.  Many unemployed Americans will receive federal assistance anyway in form of Unemployment insurance and food stamps.  Better for funds to keep them working.  Mnunchin may resist.  During TARP the fed government provided loans and bought equity which was paid back.  Sect Mnunchin may have that in back of this mind which explains his resistance to assistance that will not be paid back.  But this is much different than TARP.

—Both crises require immediate very bold action to restore the most important ingredient: confidence of the American people that it’s being sufficiently addressed.

Max Baucus: ‘Worker bee’ round of NAFTA talks to focus on easier chapters

Click here to access the article featuring Baucus: “’Worker bee’ round of NAFTA talks to focus on easier chapters”.

Baucus Says GOP Will Show Loyalty to Country, Not Trump

When it comes to N.Korea, ‘US has obligation to lead’

Senator Max Baucus: If President Trump Wants A Tax Plan He’s Got To ‘Own It’

It comes down to working together, says former Sen. Max Baucus, (D-Mont.), talking about the difficulty in getting a tax plan passed through Congress. Also Baucus explains why he doesn’t think health care reform will get very far because it’s such a “muddled mess”.

America has a mandate to create more jobs and be more competitive. US tax reforms are underway and trade pacts and policies are changing. What does that mean for your business? Former US Ambassador to China, former Senator and Chairman of the US Senate Finance Committee, Max Baucus, is covering these topics and the importance of US-China relations.