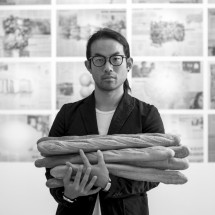 Stefen CHOW is a photographer, mountaineer and speaker.

Stefen has worked for some of the biggest organizations in the world, including Apple, General Electric, United Technologies, Wall Street Journal and Geo Magazine. He worked across 40 countries and has garnered numerous awards from the photography industry, including being awarded by the World Press Photo, Tokyo Type Director’s Club, National Geographic and D&AD Awards. Nikon named Stefen as one of Asia’s top photographers.

Stefen is also an accomplished mountaineer, having being involved in more than 10 Himalayan expeditions including summiting Mount Everest at the age of 25.

He devotes time to doing long term projects with a social conscience with his economist wife, as artist duo Chow and Lin. They travelled 150,000 km across 32 countries to create ‘The Poverty Line’, a global visual project that contextualizes poverty. Their work has been exhibited internationally in museums and biennales across 3 continents, including St Petersburg’s Hermitage Museum, Beijing’s CAFA Museum and Chicago’s Museum of Contemporary Photography.

Stefen is an experienced speaker, having given more than 100 talks to organizations and institutions, including the United Nations ESCAP, APEC Women Leadership Summit, TED and University of Science Po in Paris.

He is also a hands on father, having brought his young children on solo backpacking trips with him. He brought his daughter towards the Everest Base Camp when she was 3 years old, and his articles on parenting have gone viral and read by millions.

Stefen is fluent in both English and Mandarin. Stefen was born in Malaysia, raised in Singapore, and currently resides in Beijing.

SAGE Exclusive Speaker Stefen Chow, founder of The Poverty Line, a global poverty project that has been highlighted by the World Bank and exhibited internationally, presented his project and spoke at the United Nations ESCAP, at the UN Conference Center in Bangkok at the Committee on Social Development 5th Session. Chow and Lin, (his wife) spoke in front of delegates and government officials representing 30 countries

Stefen Chow featured in: Here’s How Much Food an iPhone Charger Is Worth

Click here to access the article featuring Chow: “Here’s How Much Food an iPhone Charger Is Worth”.

Stefen Chow: The Delightfulness of Playgrounds, as Seen From Above

When photographer Stefen Chow was growing up in Singapore, he couldn’t sit still at school.

“I was a very energetic child, and sitting in the classroom and listening to the teacher was not enough for me—I had a lot of energy to expend. I wanted to scream and jump and do everything on the playground,” he says.

Now that he is grown, with a wife and daughter, Chow wanted to pay homage to the spaces that influenced him so much as a child. And he wanted to bring the same sense of surprise and delight to his photographs that playgrounds can bring to a kid.

“As an adventurer, playgrounds played a huge part in my development,” he says. “As you grow up you realize that playgrounds becomes more invisible, and the things in front of you are what you can buy or enjoy. Playgrounds are a place where fun is simple and straightforward, and I wanted to showcase them in a way that makes people say, ‘Huh, I never thought about it in that way before.’”

In order to achieve that sense of wonder, Chow and his wife, Lin Hui-Yi, conceived the idea of The Play Project, which showcases a hundred of Singapore’s playgrounds from the air and locates them on a subway map of the city.

To make the images, Chow hired an aerial photography company called Avetics to fly drones over playgrounds in Singapore. He scouted locations from an online street directory, then visited more than 200 playgrounds and made more than 300 flights to get the hundred images that ended up on The Play Project’s website.

Avetics specializes in industrial and advertising photography, and for this project they customized a drone to carry Chow’s Nikon Coolpix A compact camera. An Avetics employee would pilot the drone, and Chow would either take the photos while looking at an LCD-type screen, or act as art director while another Avetics employee took the photos.

And even though the images appear to be empty still lifes, Chow says he was looking for moments, even in these seemingly static images. An astute viewer can spot those subtleties—as a car makes a turn around a curve or trains pass each other on opposite tracks.

According to Chow, there are more than a thousand playgrounds in Singapore, so this project wasn’t meant to be a complete survey. Instead, the project honors urban design, landscape architecture, and the pure aesthetics of the simple play space.

“My personal work has always been to get people to assume they know about something, and then realize they were wrong, or understand something deeper,” says Chow.

“What we discovered is that people in Singapore assumed that playgrounds have disappeared. But in fact they are still very alive and well—the children all know where they are, but as adults, you can’t see them.”

This project was funded in part by SG50—a nationwide effort to celebrate Singapore’s 50th anniversary in 2015.

Stefen’s presentations speak about two things: Setting goals with purpose and passion, and using communication as a way to bridge teams and create trust. He will draw from his experiences of climbing in the Himalayas and also being one of the most sought after photographers in Asia.

Stefen will use personal examples and award-winning photographs drawn from 15 years of climbing experience, along with 6 years of working in China with some of the top companies and CEOs to put forward his points in this engaging and inspiring talk with the audience.