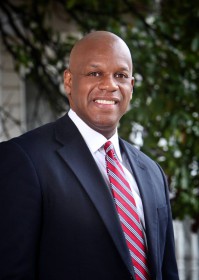 Based in Washington D.C. USA

Rick C Wade is currently President of Harves Investment Group, a U.S.-China investment firm focusing on the interactive media and clean technology sectors. He is founder of The Wade Group, a strategic communications and global business development firm as well as former Senior Vice President and Head of China Operations at Green Tech Automotive, a U.S. manufacturer of energy efficient vehicles.

Wade is a seasoned executive with deep experience in both business and government. One of six children growing up in the working class town of Lancaster, South Carolina, Wade’s parents taught him the importance of education and hard work. He had an entrepreneurial spirit at an early age as he and his younger brother pulled their red wagon around the neighborhood looking for redeemable bottles to sell to the local grocer. Wade worked different jobs throughout his teenage years to help support his family, from mowing lawns and cleaning yards to sweeping floors and painting houses. It was that same childhood entrepreneurial spirit that has motivated him to become a successful global business leader.

In 2009, Wade led the U.S. Department of Commerce until the arrival of Secretary Gary Locke who later became U.S. Ambassador to China. He was a top aide to Secretary Locke, serving as Senior Advisor and Deputy Chief of Staff. While at the Commerce Department, Wade was a strong advocate for businesses and international trade, and worked to find new opportunities for companies to sell their products in markets around the world. Total U.S. exports grew by more than $50 billion.

Wade also worked closely with stakeholders including The White House, Congress, federal agencies, state and local officials, trade associations and civic organizations. He represented the United States on the U.S.-China Joint Commission on Commerce and Trade (JCCT), Asian-Pacific Economic Cooperation (APEC), African Growth and Opportunity Act Forum (AGOA), Conference on the Caribbean and Central America (CCCA), and the Department of State Policy Coordinating Committee on Brazil. He was also Special Envoy to the Caribbean; oversaw private sector initiatives in Haiti; served on the White House Task Force on Puerto Rico; and led trade missions around the world.

Earlier in his career, Wade worked as a Senior Advisor to President Barack Obama’s campaign, a vice-president of Blue Cross Blue Shield, an executive at Hoffman-La Roche pharmaceutical company, member of the Cabinet of South Carolina Governor Jim Hodges, Executive Assistant to the President of the University of South Carolina and Chief of Staff to S.C. Lt. Governor Nick Theodore.

Wade received a Bachelor of Science degree from the University of South Carolina and a Master of Public Administration from Harvard University, where he was also a John F. Kennedy Fellow.   He has studied at both the Interdenominational Theological Center in Atlanta, Georgia and Wesley Theological Seminary in Washington, D.C. Wade has received Honorary Doctorates from Benedict College and South Carolina State University, along with numerous awards for exemplary public service and leadership.