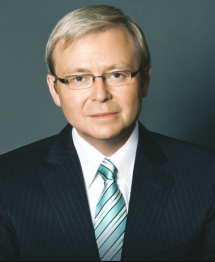 The Honorable Kevin M. RUDD served as the 26th Prime Minister (2007-2010, 2013) and as Foreign Minister (2010-2012) of Australia. He led Australia’s response during the Global Financial Crisis, reviewed by the IMF as the most effective stimulus strategy of all major economies. Australia was the only major developed economy not to go into recession. Mr. Rudd was a co-founder of the G20, established to drive the global response to the crisis, and which through its actions in 2009 prevented the global economy spiraling into depression.

As Prime Minister and Foreign Minister, Mr. Rudd was active in regional and global foreign policy leadership. He was a driving force in expanding the East Asia Summit to include both the US and Russia in 2010, having in 2008 launched an initiative for the long-term transformation of the EAS into a wider Asia Pacific Community. On climate change, Mr. Rudd ratified the Kyoto Protocol in 2007 and legislated in 2008 for a 20% mandatory renewable energy target for Australia. He represented Australia at the 2009 Copenhagen Climate Change Summit which produced the Copenhagen Accord, for the first time committing states to not allow temperature increases beyond two degrees. He was  a member of the UN  High Level Panel on Global Sustainability and is a co-author of the of the report “Resilient People, Resilient Planet” for the 2012 Rio+20 Conference. Mr. Rudd drove Australia’s successful bid for a non-permanent seat on the UN Security Council for 2012-14. His government also saw the near doubling of Australia’s foreign aid budget to approximately $5 billion, making Australia then one of the top ten aid donors in the world. He also appointed Australia’s first ever Ambassador for Women and Girls to support the critical role of women in development and reduce physical and sexual violence against women.

Domestically, Mr. Rudd delivered a formal apology to indigenous Australians. In education, his government introduced Australia’s first nation-wide school curriculum, undertook a record capital investment program in Australian schools with the building of thousands of new state-of-art libraries, as well as introducing the first mandatory national assessment system for literacy and numeracy standards. In health, Mr. Rudd in 2010 negotiated the National Health and Hospitals Reform Agreement, the biggest reform of and investment in the health system since the introduction of medicare 30 years before. His government established a national network of leading-edge cancer-care centers across Australia, before introducing the world’s first ever plain-packaging regime for all tobacco products. To improve the rate of organ and tissue donation, he established the National Organ and Tissue Transplant Authority. In 2010, he introduced Australia’s first paid parental leave scheme and implemented the biggest increase in, and reform of, the age pension in a century. He also founded the National Broadband Network to deliver high-speed broadband for every household, business, school, hospital and GP in the country.

Mr. Rudd is President of the Asia Society Policy Institute in New York. ASPI is a “think-do tank” dedicated to second track diplomacy to assist governments and businesses on policy challenges within Asia, and between Asia, the US, and the West.  He has been Co-Chairman of The International Finance Forum (IFF).  He is also Chair of the Independent Commission on Multilateralism where in 2015-16 he leads a review of the UN system. Mr. Rudd is a Senior Fellow at the Harvard Kennedy School where in 2014-15  he completed a major policy report on “Alternative Futures for US-China Relations.” He is a Distinguished Fellow at Chatham House in London, a Distinguished Statesman with the Center for Strategic and International Studies in Washington, and a Distinguished Fellow at the Paulson Institute in Chicago. Mr. Rudd is a member of  the Comprehensive Test Ban Organization’s Group of Eminent Persons. He is proficient in Mandarin Chinese, serves as a Visiting Professor at Tsinghua University in Beijing, and co-Chairs the China Global Affairs Council of the World Economic Forum.

Mr. Rudd in his private capacity has established the National Apology Foundation to continue the work of reconciliation and closing the gap with indigenous Australians, as well as the Asia Pacific Community foundation to promote regional security, economic, and environmental cooperation, and the development of effective regional institutional architecture for the future.

Kevin Rudd, the Former Prime Minister of Australia, says the U.S.-China relationship is a point of fundamental disrepair after the coronavirus pandemic. Rudd spoke with Andy Browne, the editorial director of the Bloomberg New Economy, on the virtual event series `Conversations: Risks of the U.S.-China Decoupling’, on April 21, 2020.

China’s economic recovery from the coronavirus pandemic will partly depend on how other countries fare in the global recession and the impact on the demand for Chinese goods, former Australia Prime Minister Kevin Rudd said on Friday.

The synchronous nature of the global recession is affecting external demands for Chinese goods, he told CNBC’s “Squawk Box,” a little over an hour before China reported its economy shrank by 6.8% in the first quarter.

“So, the compounding effect of other countries and economies in the world suppressing their own imports from China, for the simple reason that they themselves are experiencing demand-side crises as well,” is affecting the Chinese economy, according to Rudd, who’s currently the president at think tank, Asia Society Policy Institute.

The virus was first reported in the Hubei province late last year and its spread in mainland China appears to have slowed in recent weeks, with new daily reported cases comparatively lower than other parts of the world. Recently, Beijing lifted an 11-week lockdown of Wuhan, the city at the epicenter of the country’s outbreak.

The return-to-work rate in China has crept higher as more companies resumed production, but the landscape remains drastically altered.

However, that metric is different from returning to previous production levels, Rudd pointed out.

“Frankly, until consumers begin behaving more normally in China, there’s always going to be a constraint on their ability to economically return to where they were before.

“There are a whole bunch of areas of production, not least of which are, in the services sector, where consumers have been reluctant to return to demand. So, overall supply coming out of the economy has been impacted,” he said.

Chinese exports for March fell but the decline appeared to be less steep than what economists had predicted.

The International Monetary Fund recently described the current global environment as the worst economic downturn since the Great Depression.

Rudd said that China’s policy response to the virus’ economic impact has been comparatively muted. Measures taken by Beijing include relaxing regulations, taxation holidays or postponing of obligations as well as direct payments to consumers in the form of coupons, according to him.

“I think the Chinese right now are examining carefully their toolbox about what they do next because, frankly, until consumers begin behaving more normally in China, there’s always going to be a constraint on their ability to economically return to where they were before,” he added.

Risk of a second wave

Governments around the world are racing to contain the coronavirus outbreak which has infected more than 2.15 million people and killed more than 144,000 worldwide. The worry among policymakers and health experts is that there might be a second wave of infection when social distancing measures, mass quarantine, and lockdowns are eased.

Yet, prolonging those measures would have an adverse impact on economic activity that will hurt growth, employment, the supply of essential goods and the quality of life. In fact, there’s already concern growing in China and other parts of the world about long-term food security and the impact on food prices, the former prime minister said.

In the United States, President Donald Trump unveiled broad new federal guidelines that lay out conditions for parts of the country to start relaxing some of the strict social distancing measures.

“The worst thing that can happen in America is for that to happen prematurely and for there to be a genuine second wave effect in terms of the virus breaking out of the box again,” Rudd said.

2020 will be the worst year since the Great Depression with COVID-19 set to wipe an extraordinary $14 trillion off the global economy.

The International Monetary Fund says the Great Coronavirus Lockdown will see economies shrink dramatically in more than 170 countries, including here in Australia where growth will dive by 6.7 percent and bring nearly three decades of economic sunshine to a shuddering halt.

The decline in international output is forecast to be 30 times greater than during the global financial crisis.

Trump’s War With China Has Only Just Started

Are China and the US doomed to conflict?

To avoid the war that research has found frequently occurs between an established nation and a rapidly rising power, a common basis must be discovered. A constructive realism for a common purpose must be formulated. Striking out collaboratively against climate change is also helpful. Truly working towards a jointly acceptable set of solutions should be the goal of both China and the US. Furthermore, taking a leap of faith to try to attain a dream for all of humankind, not just the Chinese Dream or American Dream, is a challenge for all of us.

Trade Wars Are Easy To Start But Hard To Stop

South Korea Will Be Happy With the #TrumpKimSummit